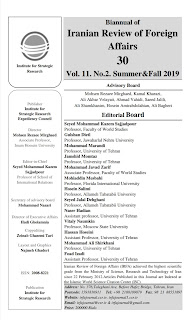 My latest journal article "Domestic Factions and the External Environment in Iran's Foreign Policy" has been published in the Iranian Review of Foreign Affairs, Volume 10, No.2, Issue 30, pages 231-254. It is available by clicking here. The whole Issue is available here.

Abstract: Since 1979 Iran’s foreign policy has swung from pan-Islamism to nationalism, from ideology to pragmatism, from détente to postdétente. This article aims at explaining how domestic factionalism has affected Iran’s foreign policy over the past 40 years and, vice-versa, how it has been shaped by external stimuli. Factionalism can be considered as an intervenient variable which, alongside the external environment, may have an impact on Iran’s foreign policy making. But it can also be considered as a dependent variable which may be affected by external constraints. I argue that when factionalism emerges, Iran’s foreign policy generally tends to be characterized by ideology. However, this may also be a function of increasing external pressures. At the same time, factionalism is generally toned down when either domestic imperatives or external forces push Iran to adopt a more pragmatic stance in foreign affairs. The background argument is that despite an influential role of religion in the country’s politics and policies, Iran has remained committed to defensive and realist imperatives for most of the last 40 years. The main questions here addressed are: how does factional politics in Iran reflect upon a certain foreign policy making? How does factionalism is in turn affected by external challenges/ threats and how does it translate either into an ideological or a realist and pragmatic foreign policy?